Sumatran orangutan Natalee and her three close friends, Ung Aing, Ying, and Mama Zila were released into the Bukit Tigapuluh Ecosystem in Sumatra in September 2022. 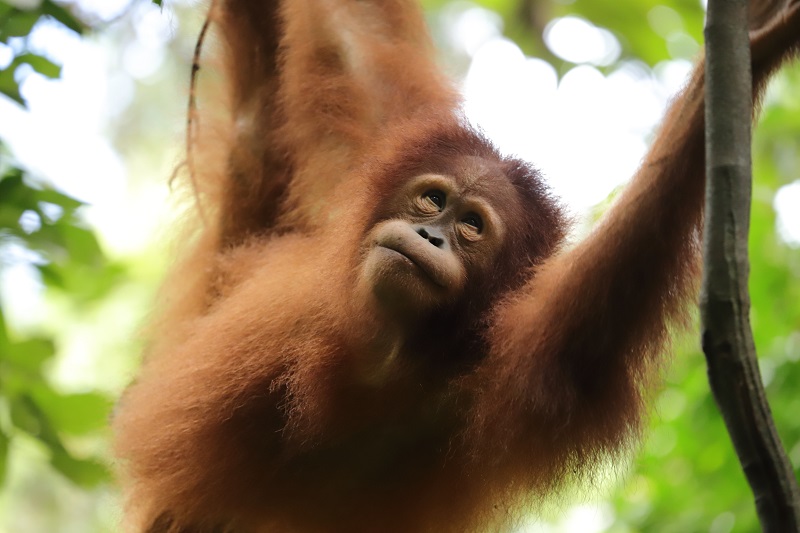 Natalee climbing high in the canopy

Young orangutans like Natalee are always closely monitored and supported by trackers after their release; however, Natalee and her friends are now living permanently in the jungle and no longer returning to an enclosure overnight. Natalee has overcome so much, and we wanted to reminisce on her story and celebrate her forest freedom with you.

Natalee was born in approximately 2016. She and another young orangutan named Ung Aing were smuggled into Thailand as babies. In December 2020, the Jambi agency for the Conservation of Natural Resources arranged for their repatriation back to Indonesia from a wildlife rescue centre in Thailand. Natalee was in a healthy condition and was quite friendly with staff. Natalee and Ung Aing were very closely bonded as they had gone through so much together.

After undergoing quarantine and a full medical check, these two youngsters made the journey to the Open Orangutan Sanctuary in the Bukit Tigapuluh Ecosystem in Sumatra run by the Ministry of Environment and Forestry and our partner Frankfurt Zoological Society. Natalee soon commenced Jungle School with other orangutans but always stayed close to her bestie Ung Aing. She did not like to be carried to Jungle School and would use the ropes to climb from her enclosure to the forest. Natalee was eager to explore the forest and tried many forest foods including fruits, leaves, cambium, and stem. She also enjoyed all the food and soy milk given to her by the keepers. 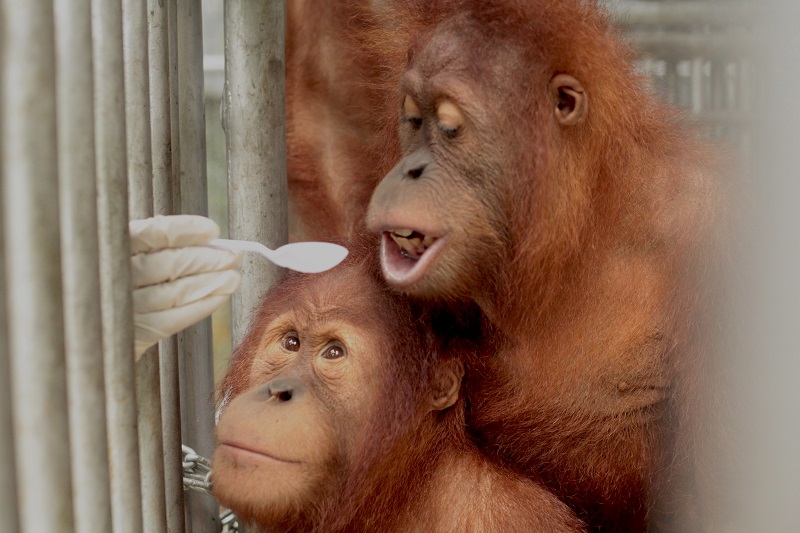 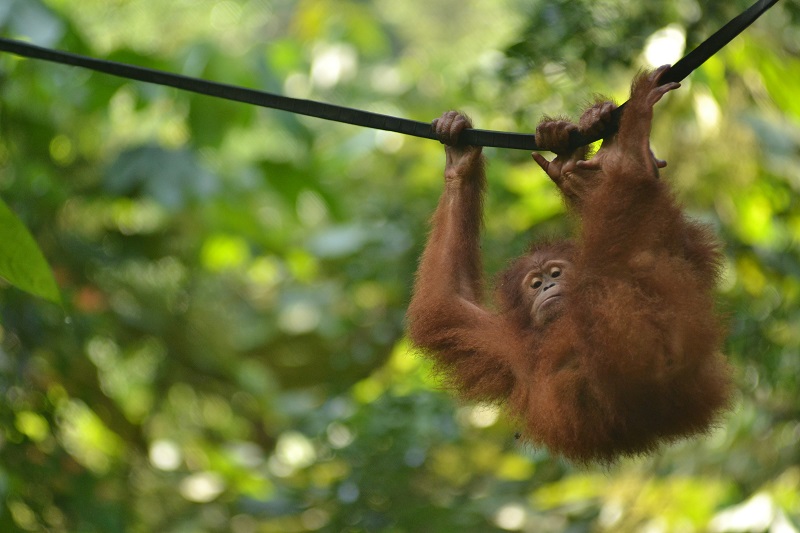 When the orangutans don’t attend Jungle School, they receive food five times a day in their enclosures. Their diet includes high carbohydrates (corn, sweet potatoes, and bananas), high fibre (fruits and vegetables), and protein (milk, tempeh, boiled eggs). Natalie loved all the fruits that were given out especially sweet fruits like pineapple, sawo and guava. She also enjoyed using all the different enrichment items including puzzle feeders, feeder balls, leaves with honey, leaf parcels and fishing for food pieces with long sticks. The keepers also helped Natalee and her companions to stay busy by bringing them different forest fruits, leaves, and termites.

Jungle School was conducted with strict health protocols during the COVID-19 pandemic. Orangutans are susceptible to human diseases, so every precaution was taken to protect the orangutans from this virus including the regular testing of staff for COVID-19. Natalee proved herself to be an active and playful orangutan who was quite friendly with the orangutan keepers when she was in her enclosure, although she was quite wary and shy of them when out at Jungle School.

By the end of 2021, Natalee still had much to learn in the forest; however, the orangutan keepers were pleased with her progress including her foraging ability. She would often go down to the ground, which can be a common thing for orangutans to do when they’re  new to Jungle School. As young orangutans build up their strength, fitness and confidence in the canopy, this behaviour usually decreases and stops altogether. Throughout 2021 Natalee still didn’t know how to build a nest; however, the staff were confident she would learn this skill in time from other more advanced orangutans at the sanctuary. 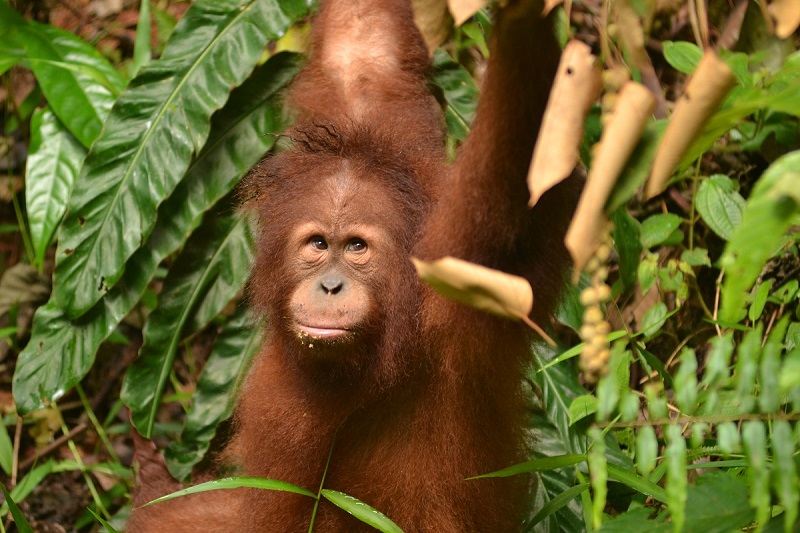 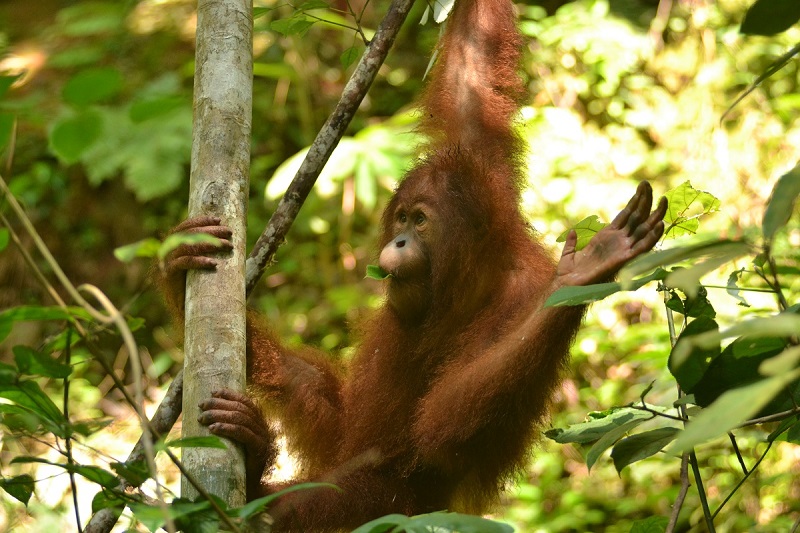 Natalee looking up into the canopy and munching on leaves

By early 2022, Natalee had continued to build upon her forest skills during Jungle School. She usually ventured out to Jungle School with her good friends Ung Aing or Marike. Natalee’s behaviour in the forest was dominated by moving around and exploring the area. She also spent over 30% of her time feeding on forest food items. Natalee mostly ate liana fruits, although she also ate other important food sources for wild orangutans including bark, flowers, stem, leaves, and termites.

Natalee was now spending most of her time about five to ten metres high in the canopy.  In February, she was encountered building good quality nests ten metres above the ground, which was a very exciting development. Orangutans learn how to build nests from their mothers, and it is a skill that can take years to perfect. In Jungle School, young orangutans often learn how to make nests from observing more experienced orangutans and through trial and error. Nest building is a skill that orangutans need to develop before being released. It is vital that orangutans can build a strong and comfortable nest to sleep in overnight high in the canopy, so they are safe from Sumatran tigers and parasites living on the ground.

Natalee’s jungle skills continued to improve over time, including her nest building. Due to Natalee’s excellent forest skills, she was released in late September this year with her three friends, Ung Aing, Ying, and Mama Zila. So far, Natalee has shown good survival skills in the forest including building and sleeping in a nest every evening. Natalee and Ung Aing are traveling together. They socialise with other young, released orangutans and often feed in the same trees. Natalee has mainly been eating liana and beluluk kayu fruits and consumed stem, bark, flowers, and insects. Natalee is spending most of her time ten metres above the ground. She was recently attacked by bees when she tried to get honey from a beehive, so she hasn’t tried this again! 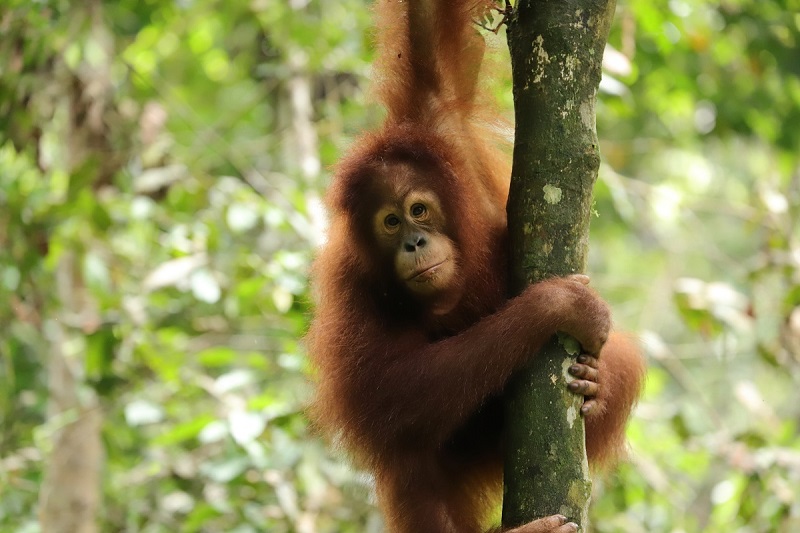 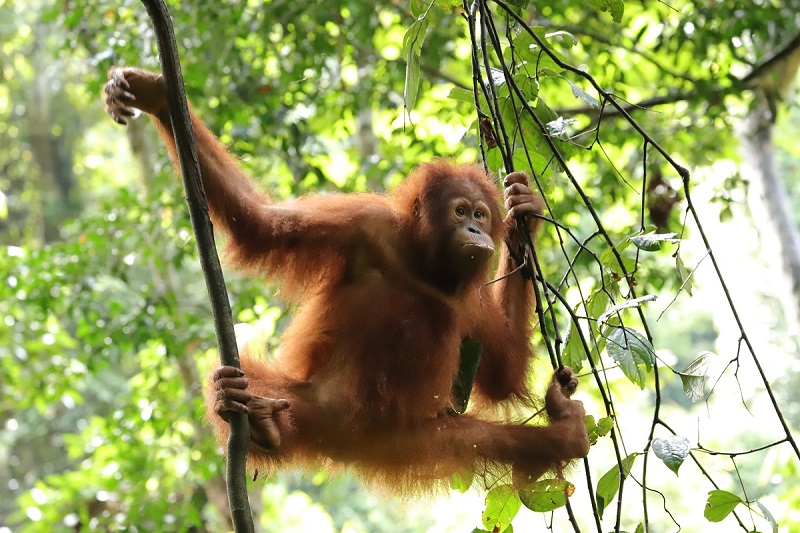 Natalee developing her climbing skills in the canopy

Natalee will be closely monitored for many months as she becomes more familiar with jungle living. We are thrilled that Natalee has regained the freedom that was stolen from her. Natalee’s story is one of resilience and hope, showing how much some orangutans can overcome and achieve when given the time and support they need to live a life of freedom once again in the jungle.

We are so grateful to our supporters for helping Natalee return to the wild. Your support has helped provide her with Jungle School training, food, enrichment, and medical care when needed to ensure she is safe and thriving in her true jungle home. Natalee has shown intelligence, curiosity, and excellent forest skills during her time at Jungle School, so we are confident that in time she’ll fully adapt to living in the BTP jungle. Her precious freedom has been made possible thanks to your generous support. Thank you!

(Program run by Ministry of Environment and Forestry and FZS)