Cheeky Gokong is now five years of age and is going well at the SOCP Rehabilitation and Quarantine Centre in North Sumatra. He is in very good health and weighs 16.7 kg. Gokong has been attending forest school regularly and it has had a strong positive impact on him.

In our last update, Gokong was spending quite a lot of time on the ground wrestling, rolling and playing with other orangutans such as Deka, Bintang, and Sule. Gokong also liked to go close to the keepers on the ground and would pull on them and try and play bite. The more the staff tried to stop him from doing this, the harder Gokong would try to reach them!

Therefore, the staff decided on a different strategy, and simply didn’t engage with Gokong when he was trying to play with them. This resulted in Gokong seeing that there was no ‘pay off’, and instead he began to spend more time with the other orangutans which was the desired outcome. He hasn’t completely given up on trying to play with the human caretaker staff, but when he does it’s only for a short time and then he’s off exploring again, so, it’s progress!

Gokong has since begun spending a lot more time up in the trees. He is learning how to move from one tree to the next by grasping the branches, swinging, or bending the tree, instead of jumping or going down to the ground to get to the next tree.  He has also started following another orangutan named Keumala, in the very high Artocarpus sp trees in one of the on-site forest school areas.

Overall, the staff are very pleased with Gokong’s improvement over the last six months.  Although it has taken some time, he is less and less interested in interacting with humans and seems to have realized that it is much better to explore the forest with the other orangutans, rather than spray water or pee on the staff as he’s done in the past!

Although he has shown much improvement, Gokong still needs to gain more forest knowledge and skills before he can live freely and independently in the forest. Gokong needs to further develop his climbing and traveling skills in the canopy. He also needs to learn how to build a proper nest and be able to find and taste a wide variety of forest foods. The staff are being patient with Gokong at forest school and not pushing him too much. Pushing young orangutans to adapt more quickly than they are comfortable with can quickly result in negative impacts including orangutans becoming frustrated, more aggressive or they can lose confidence. Given time and the opportunity to learn from other orangutans will allow Gokong to develop his forest skills on his rehabilitation journey. 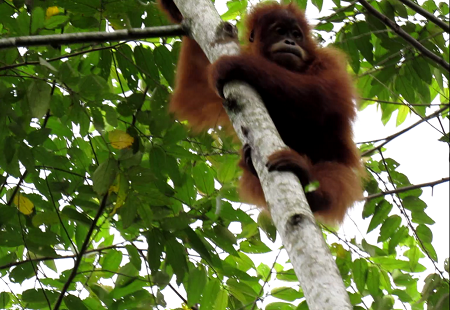 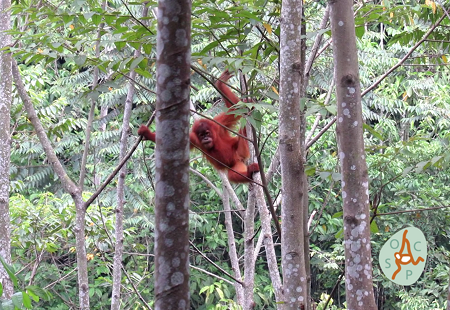 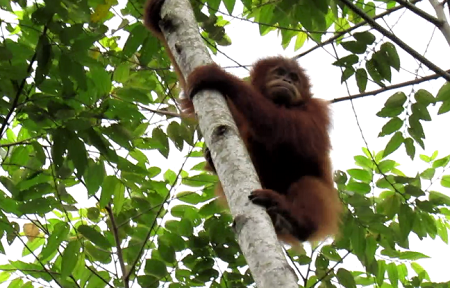