Cece is now about eight years of age. She has made very positive progress over the last six months at forest school at the SOCP Quarantine and Rehabilitation Centre.

Cece can move among the trees with high skill and knowledge and can even calculate if the branches will support her when traversing the trees. This is a very valuable skill orangutans need to learn so they can stay safe in the rainforest canopy.  She has also started planning out her routes before moving, another vital ability.

Cece has also been observed trying to build a nest for the first time.  Although the results were not quite ‘perfect’, her carers were all very pleased and proud that she has started trying.  It’s very likely she started trying after watching other orangutans building nests. This shows that orangutans learn from one another and this is a skill that her mother would normally teach her. With continued observation and practice, Cece will most likely be fully building proper nests that are capable of supporting her through the night – and eventually after she is reintroduced into the wild, will support her and her offspring in the wild!

Recently, Cece has spent more time playing rather than exploring during forest school outings. She often climbs to a height of 3-4 metres and wrestles with other orangutans including Sule or Siboy. This shows that Cece is more comfortable with her surroundings, other orangutans and the forest, so as a young orangutan she is focused on having fun with others rather than exploring high above the trees by herself. Play is an important part of a young orangutan’s development and she will develop skills during this time including her coordination in the canopy and general fitness.

Cece weighs 16kg and is considered slightly overweight however she is in very good health. The staff at the centre feel it is time to challenge Cece at forest school. They will soon move her to the more complex and larger forest school setting. This will enable them to assess whether Cece is ready for real jungle life or if she simply wants to be around other orangutans so she can play. It is also planned to give Cece more time at forest school so she can practice more and further develop her skills.  This will allow staff to better assess Cece’s progress and see what she still needs to learn. They can then decide if she is ready for a more complex and larger forest setting, and an independent life as a reintroduced orangutan. 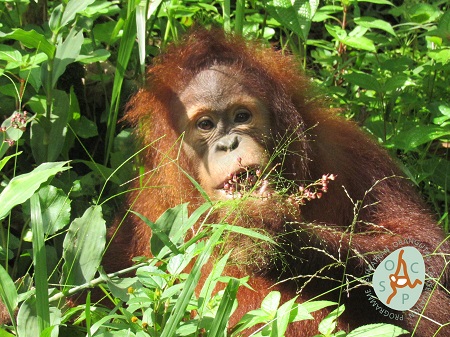 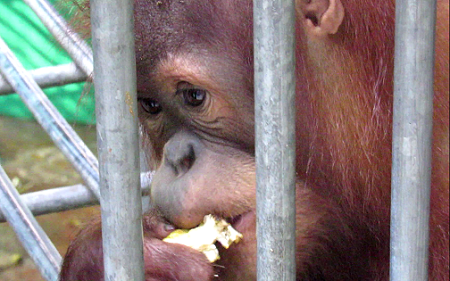 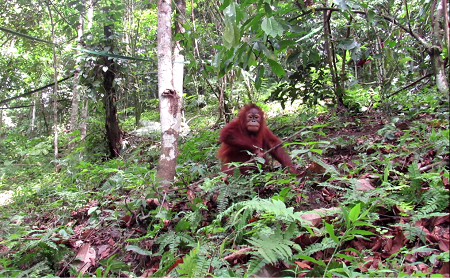